Edit and Join with Mapshaper

Mapshaper is developed and maintained by Matthew Bloch on GitHub. This easy-to-learn web tool has replaced many of our map preparation tasks that previously required expensive and hard-to-learn ArcGIS software, or its free but still-challenging-to-learn cousin, QGIS. Even advanced GIS users may discover that Mapshaper can be a quick alternative for some common but time-consuming tasks.

You can use Mapshaper to convert between geospatial file formats. Unlike GeoJson.io, Mapshaper also allows you to upload Esri Shapefiles, so you can easily convert them into the web-friendly GeoJSON format. In the following steps, we will convert a geospatial file by importing it to Mapshaper, and then exporting it as a different file type.

Note: If you want to import a folder of shapefiles, you need to either select all files inside that folder and drop them all together to the import area, or upload all of them inside a compressed .zip archive. 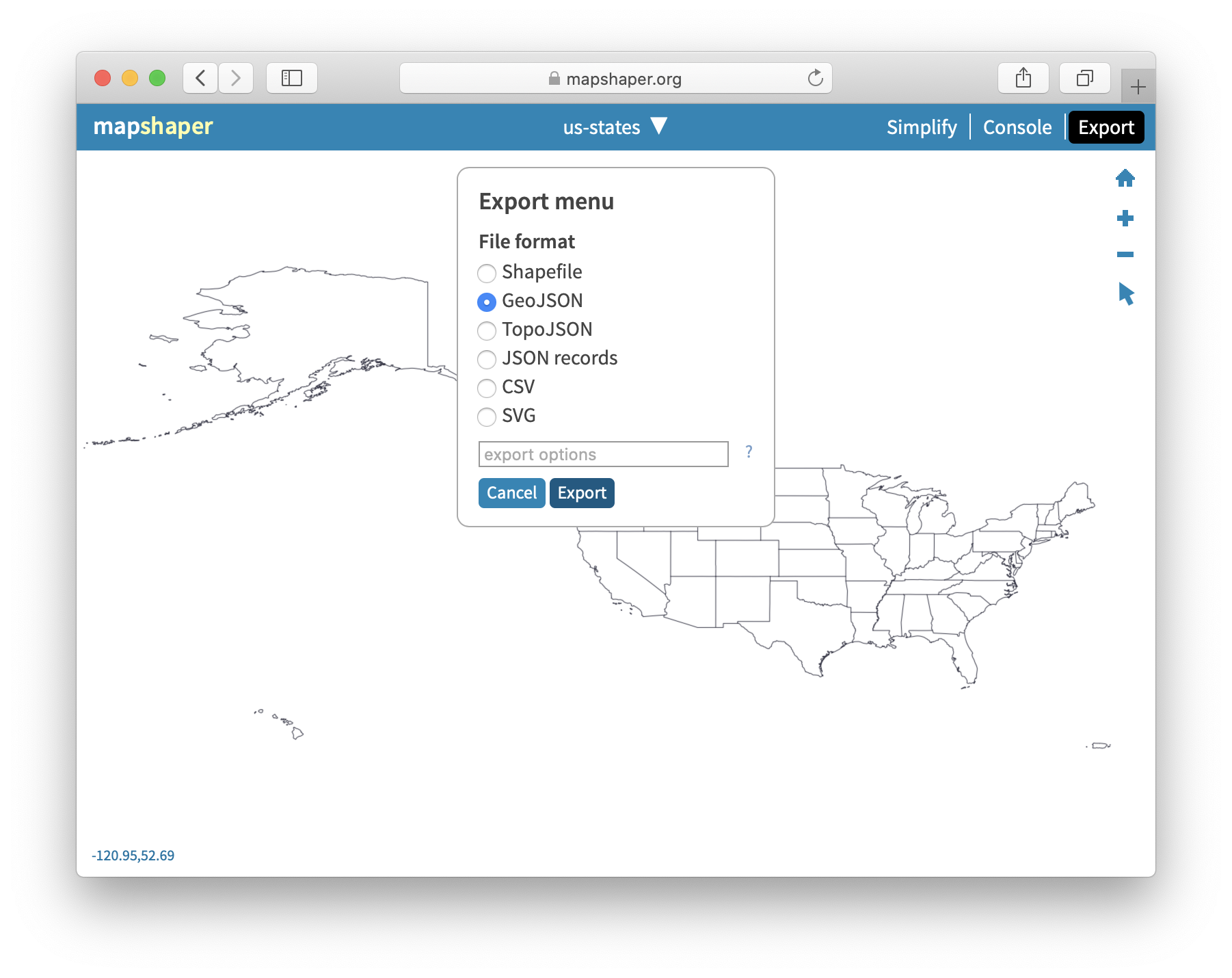 Figure 13.8: You can use Mapshaper to quickly convert between geospatial file formats.

Tip: Mapshaper doesn’t work with KML or KMZ files, but you can use GeoJson.io to first convert them into GeoJSON format, then upload to Mapshaper.

You can edit attribute data of individual polygons (and also points and lines) in Mapshaper, as shown in Figure 13.9. 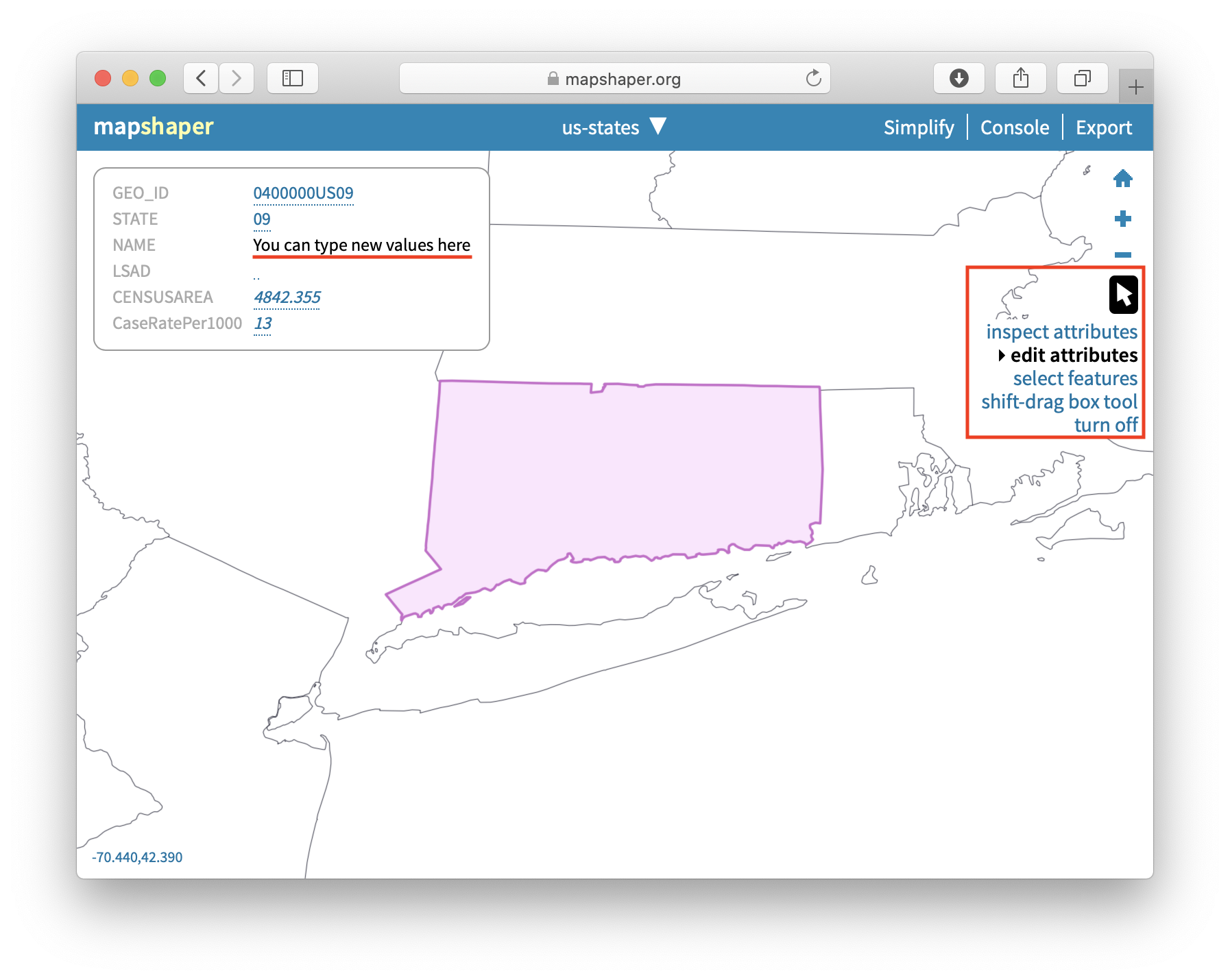 Mapshaper’s most powerful tools are available through the Console button at the top, which opens a window where you can type commands for common map editing tasks.

Sometimes map features (such as points, polylines, and polygons) contain attributes (data fields or columns) with long or confusing names. In the Mapshaper Console, you can easily change field names by entering the rename command in this generic format:

First, select the inspect features arrow symbol in Mapshaper and float your cursor over map features to view their field names, then click open the Console windows, as shown in Figure 13.10. In this example, to change the longer field name (STATE_TITLE) to a shorter one (name), enter this command into the console:

Figure 13.10: Select the inspect features arrow to view field names, and rename them using the -rename-fields command in the console.

Sometimes map features contain unwanted attributes (data fields or columns) that you want to remove, which you can easily do with the -filter-fields command in the Mapshaper console.

For example, this command removes all fields except town:

If you want to leave more than one field, separate them by a comma, but without spaces, like this:

Warning: If you leave a space after a comma, you will get a Command expects a single value error.

When you find GeoJSON maps on the web, they may contain detailed boundaries (especially around coastlines) that increase the file size, which may slow down the performance of your online web maps. Since you do not always need highly-detailed boundaries for data visualization projects with zoomed-out geographies, consider using Mapshaper to simplify your map boundaries. The result will be less precise, but faster to load in user’s browsers.

To simplify map boundaries in Mapshaper, follow the steps below. 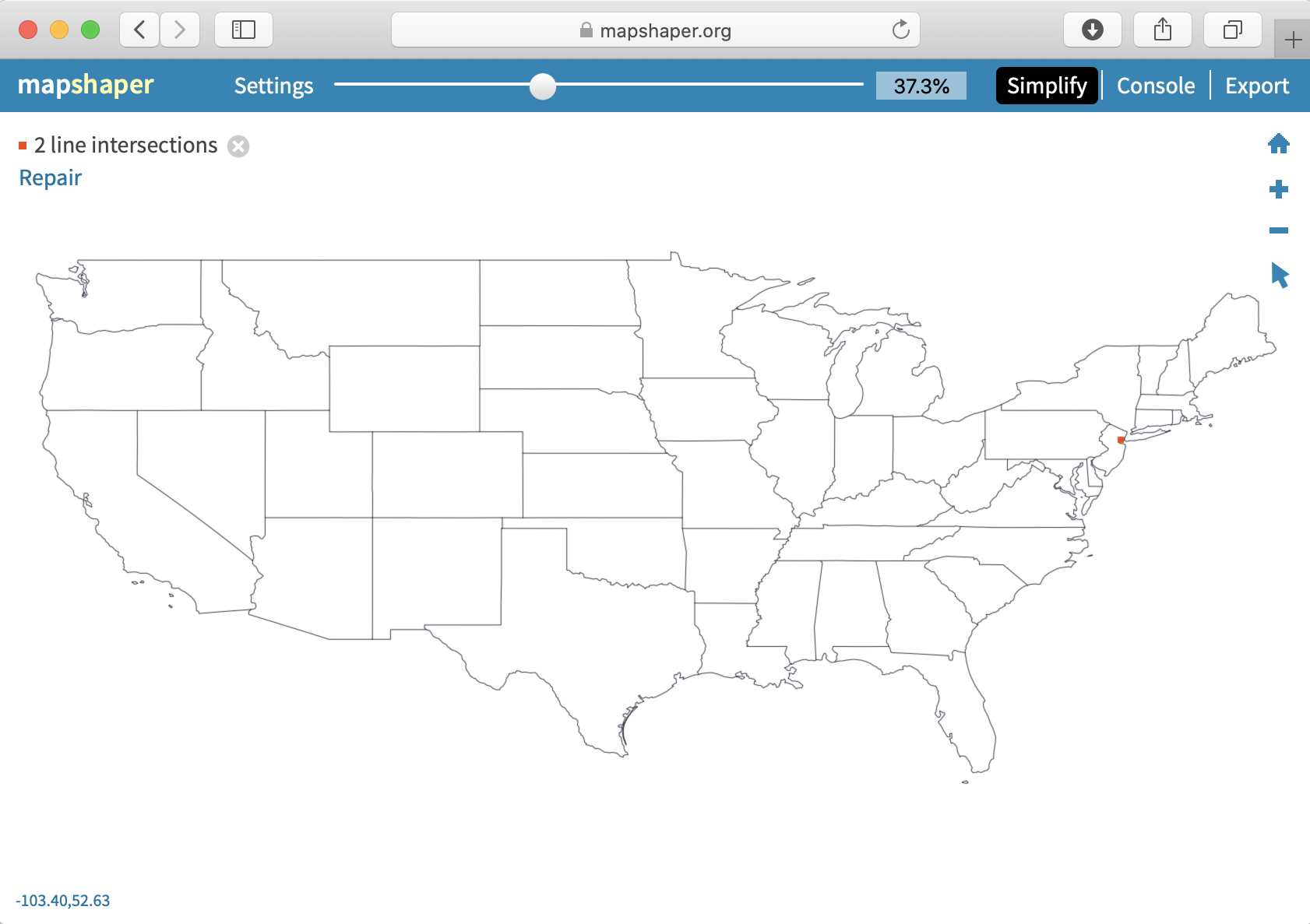 Tip: When you upload a geographic file to Mapshaper, you may need to change its projection to align with your visualization tools or related geodata. Click to open the Console and type -proj wgs84 (or -proj EPSG:4326) to change the projection to World Geodetic System 84 (wgs84), the format used by the Global Positioning System (GPS) to display geocoordinates around the world.

A common map editing task is to create an outline map by removing the internal boundaries. For example, you can dissolve state boundaries of the US map in the previous exercise to get the outline of the country, as shown in Figure 13.13. 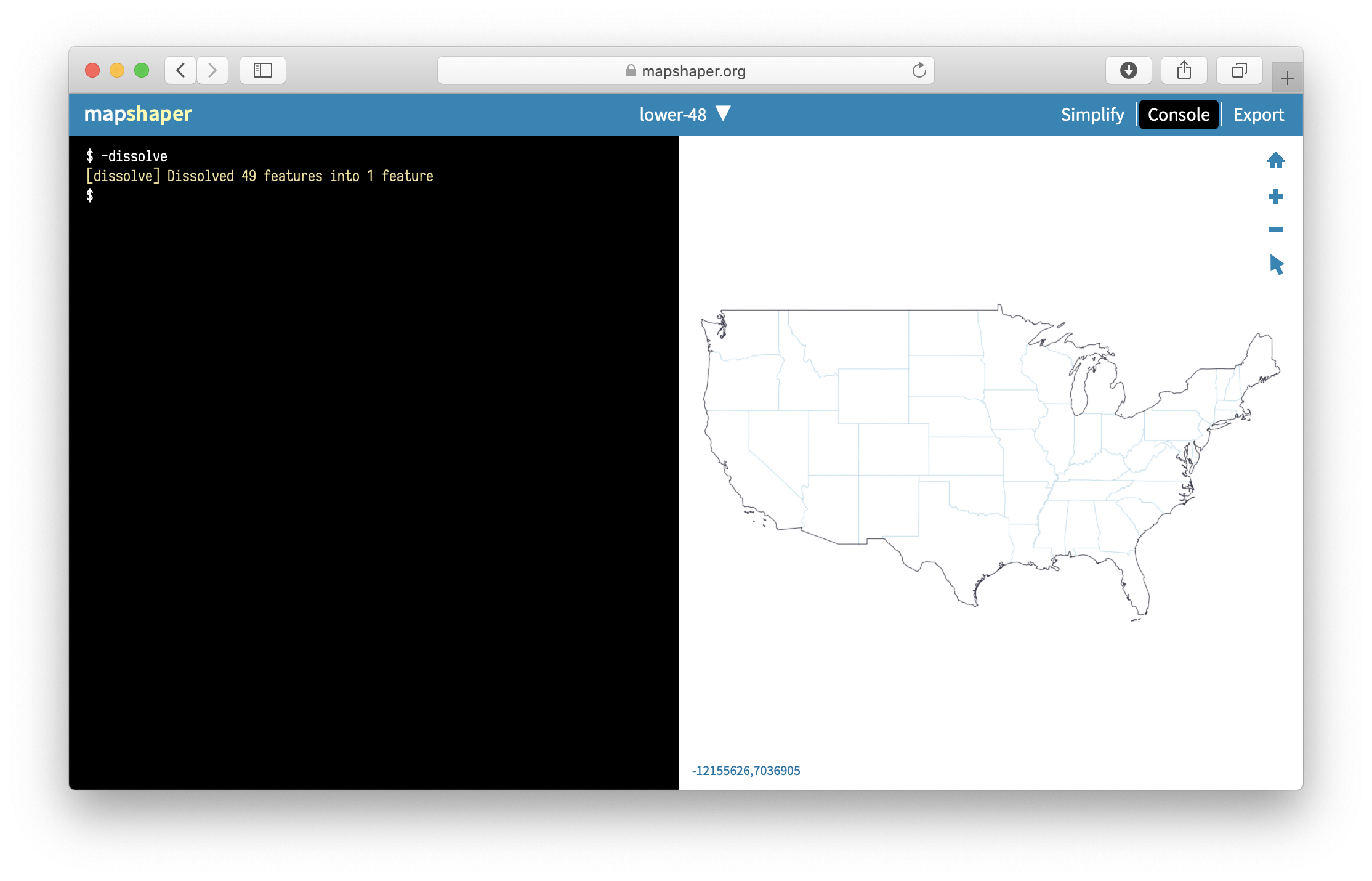 Click on Console, which opens a window to type in commands. Enter the dissolve command exactly as shown below, then press the Return or Enter key.

You will see that internal boundaries became lighter color, and that’s Mapshaper’s way of saying they no longer exist. You can now export your outline shape.

Clip a map to match an outline layer

Another common map editing task is to “clip” out a smaller portion of a larger map to obtain only the area you need. For example, the State of Connecticut consists of 8 counties, which in turn are divided into a total of 169 towns. Imagine you are given a boundary file of all 169 towns, and the outline of Hartford county. You need to “clip” the original towns map to only include those towns that fall within a specific portion of Connecticut: Hartford County.

Mapshaper allows you to do just that using one simple -clip command. 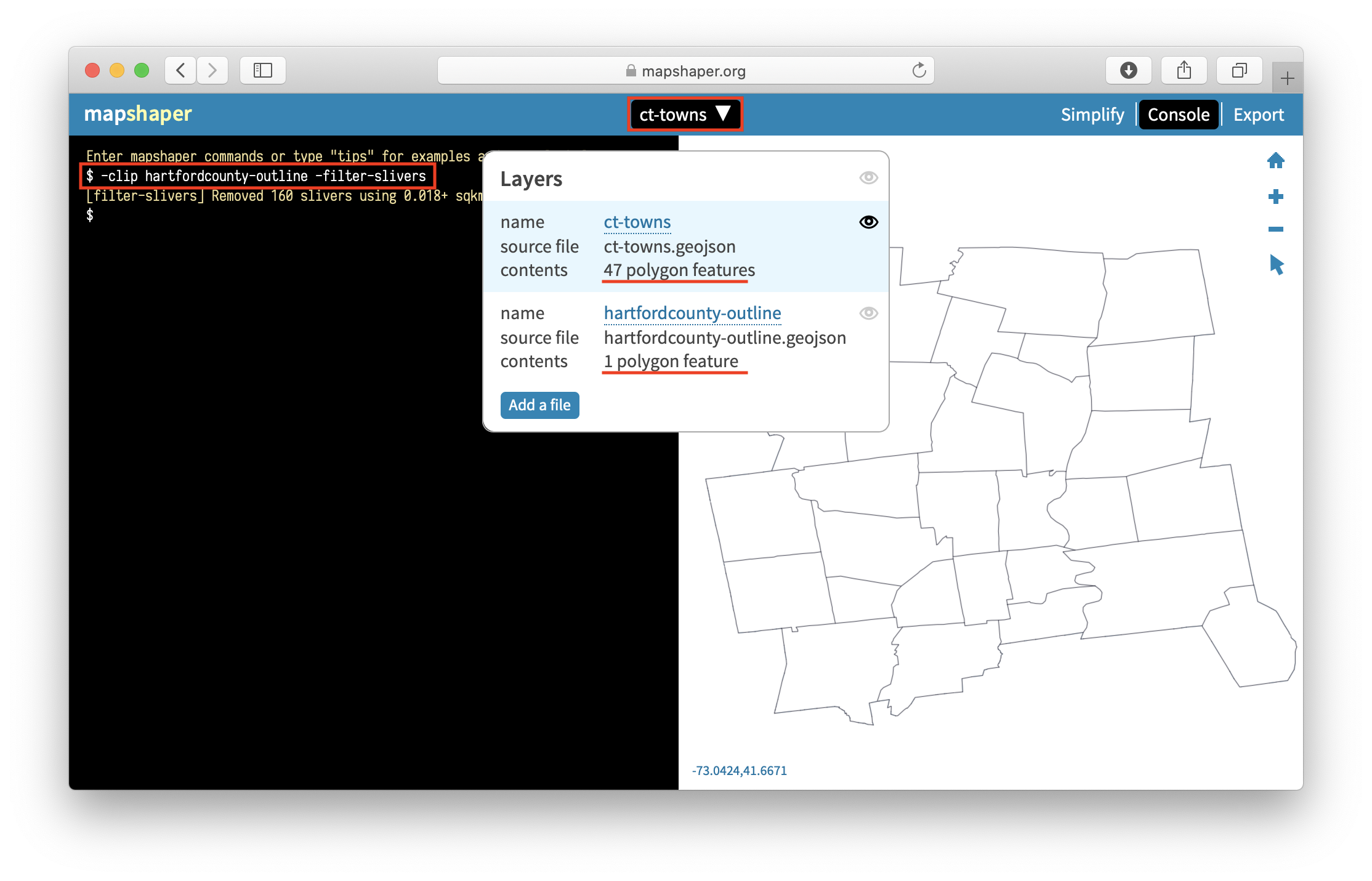 Figure 13.14: When clipping, make sure your active layer is the one being clipped (with many features), not the clipping feature itself.

Mapshaper provides a powerful -join command to connect these files files. Remember that you need some common keys in both datasets (such as town name, or state, or country) in order to join the two files. Without a common field, Mapshaper has no way of knowing which numbers belong to which polygons.

In this command, ct-towns-popdensity is the CSV layer you are merging with, and keys are the attributes that contain values to join by. For our sample data, these would be town names which are stored in name attribute of the map file, and town column of the CSV file. 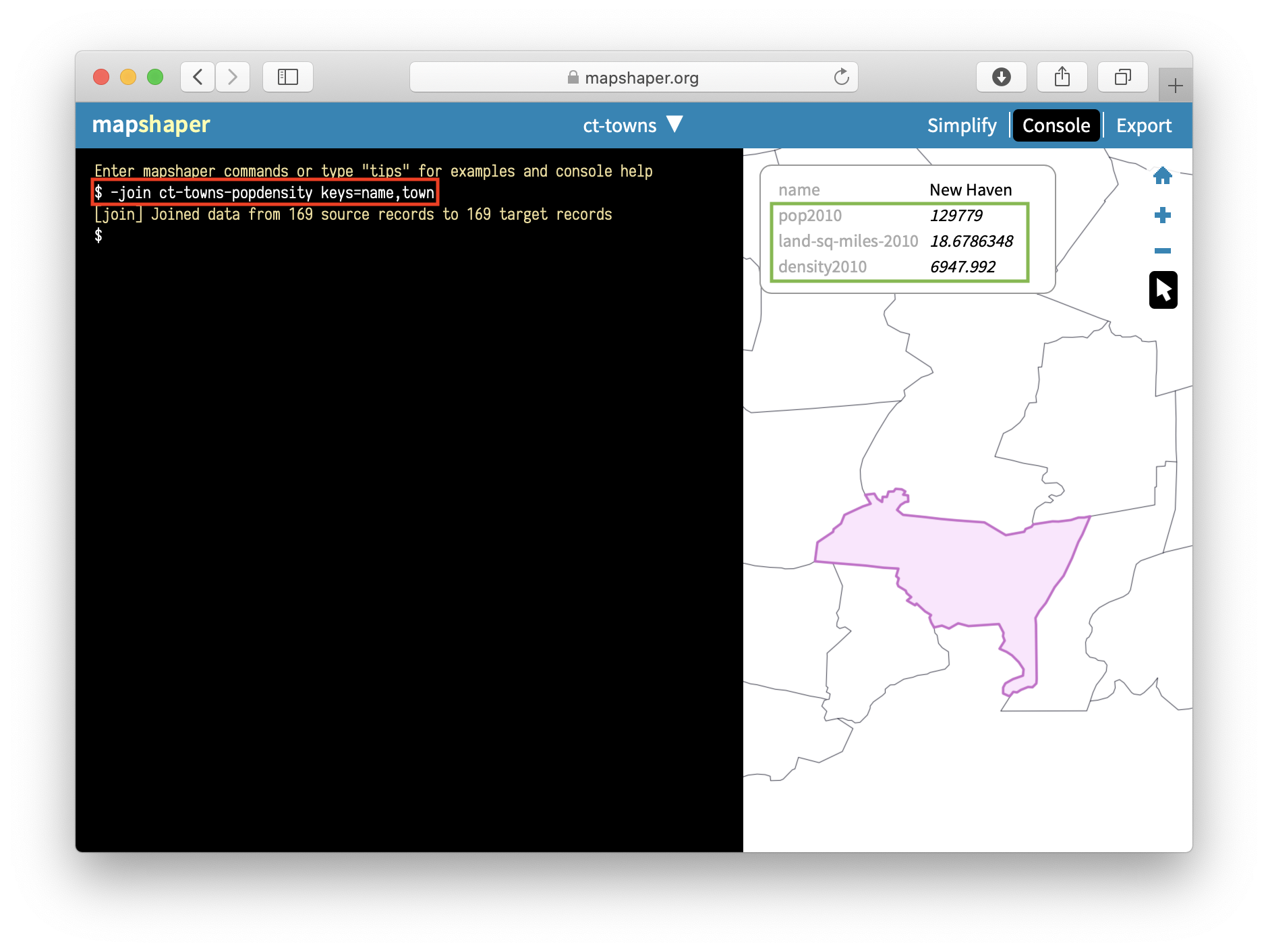 Tip: To avoid confusion, consider using the -rename-fields command on your CSV data that contains key values, in order to match the key attribute name of your map. In our example, first you would -rename-fields name=town to your CSV file. Renaming this CSV field to name avoids confusion in the second step, because your join command would end with keys=name,name.

Count points in polygons with Mapshaper 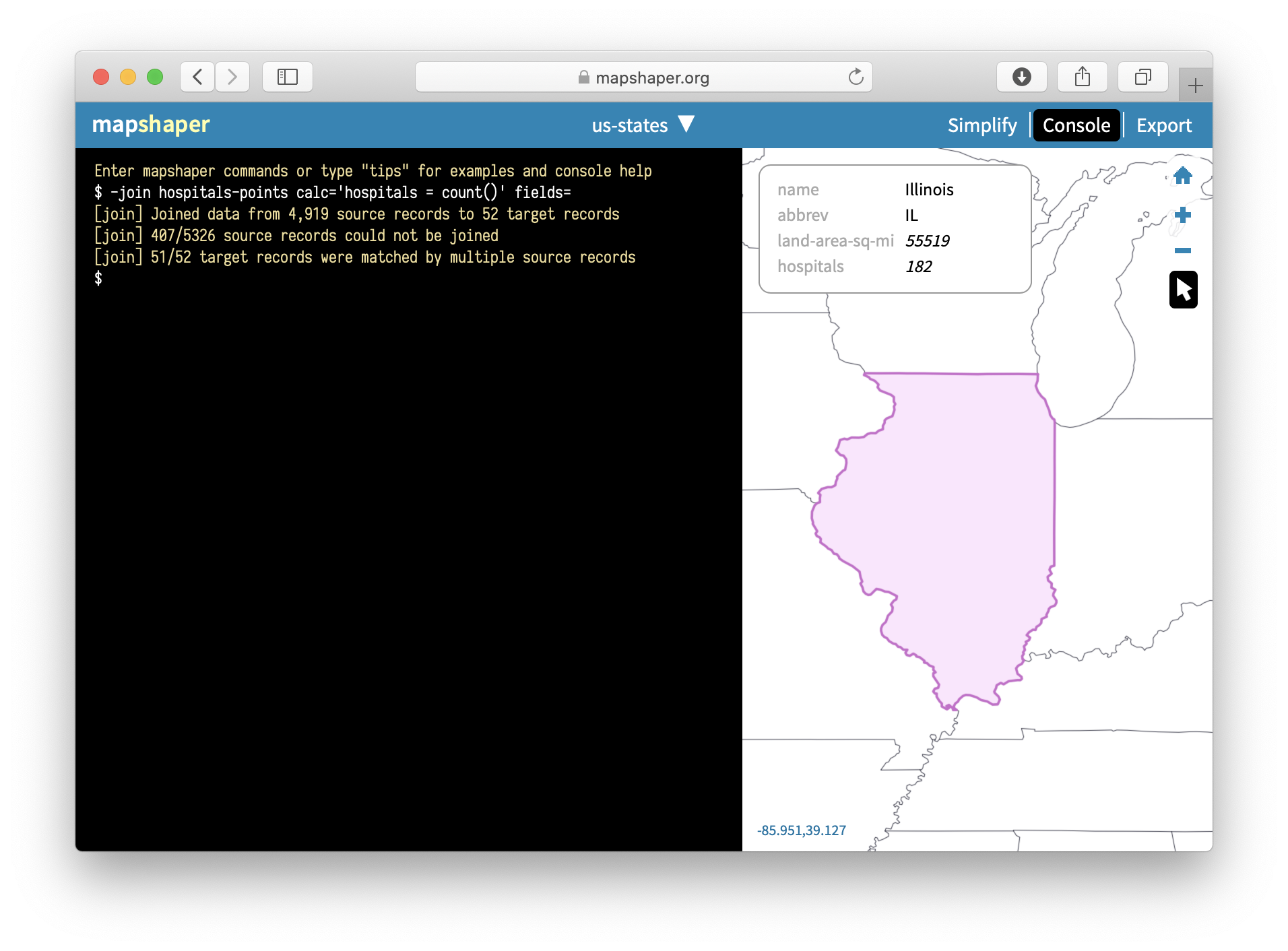 In the section above on “Count points in polygons,” you did not need to specify keys to join locations between two geographical layers: points and polygons. But if one of the files you wish to join is a CSV dataset, you need keys.

If you don’t have a CSV dataset that matches the columns in your boundary map data, you can easily create one. Upload the boundary map to Mapshaper, and export in CSV format. Open the downloaded CSV file in any spreadsheet tool. To match data columns in the CSV spreadsheet, use the VLOOKUP function.

In real life, you will rarely have perfect files with one-to-one matches, so you might want to have more information about which features didn’t get matched so that you can fix your data. Mapshaper helps you keep track of data that is not properly joined or matched. For example, if the polygon map contains 169 features (one for each town in Connecticut), but the CSV table contains only 168 rows of data, Mapshaper will join all of those with matching keys, and then display this message:

To get more details on which values were not joined, add unjoined unmatched -info flags to your join command, like this:

In Mapshaper, you can merge selected polygons into larger clusters using -join and -dissolve commands. Imagine that you are employed by the CT Department of Public Health, and your task is to divide 169 towns into 20 public health districts and produce a new geospatial file.

You should begin by creating a crosswalk of towns and their health districts, which means some way of matching two sets of data, such as zip codes and towns where they are located. In our case, the crosswalk can be as simple as a two-column CSV list of a town and its district, each on a new line. Because your boss didn’t give you a list of towns in a spreadsheet format, but instead a GeoJSON file with town boundaries, let’s extract a list of towns from it. 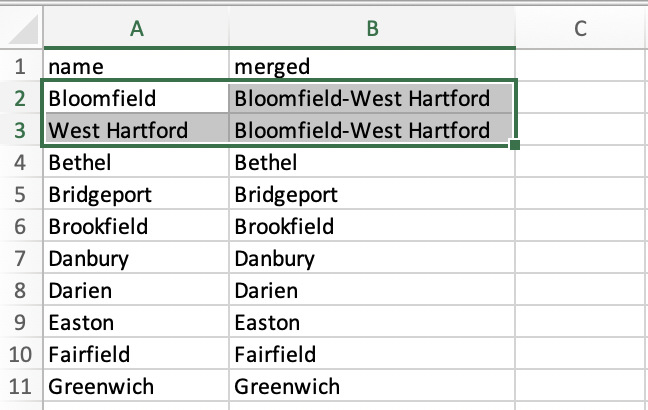 Figure 13.17: Create a two-column crosswalk of town names and their merged health districts.

to join the CSV layer with the boundaries layer that you see on the screen.

to dissolve polygons of towns according to the merged column of the CSV file.

In our example, only Bloomfield and West Hartford are dissolved into a combined “Bloomfield-West Hartford” regional health district, with the shared boundary line between those towns becoming grayed out, and all of the other polygons remain the same. Figure 13.18 shows the final result. 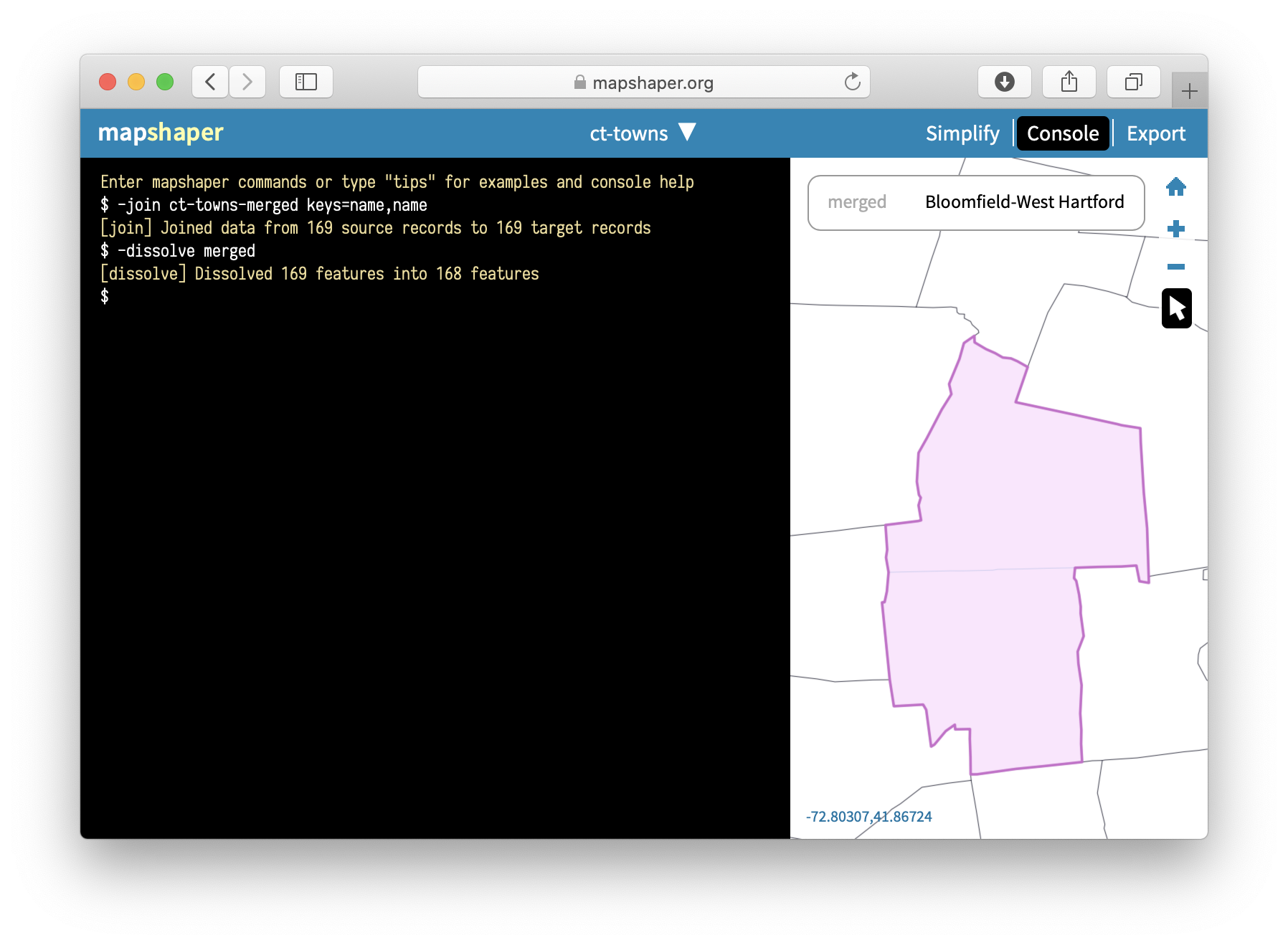 Figure 13.18: Merge polygons based on a predefined crosswalk.

You can inspect attribute data of polygons using Cursor > inspect features tool, and save the resulting file using the Export button.

Overall, Mapshaper is a powerful geodata editing tool with many more commands that are worth exploring. Some of these include changing projections, filtering features using JavaScript expressions, assigning colors to polygons based on values, and many more. Explore the MapShaper Wiki on GitHub to learn more commands and see more examples.